The second motto “ties in how I hope to continue to travel and bring home new ideas and flavors that we can have in our beer program,” explains Evan Price, Co-Owner & Brewer at Green Cheek Beer Co.

It was travel that propelled Price into brewing. “After drinking my way through Europe with some friends in 2005, I started home brewing. Six months of frustration and a lot of dumped batches later, I got a job at BJ’s working in one of their breweries! The goal at the time was just to learn how to make my home brew better. I never thought it would actually become my career! From there I worked at some other breweries till 2017 and then opened up Green Cheek with my pal Brian.”

For Price, brewing is an adventure. “I love how challenging it is! I love constantly tinkering with each recipe through changes in process and ingredients in order try to get closer and closer to the forever moving target of what I think a specific beer style should be. I never actually feel like I hit the target, but it’s the journey that makes it awesome. You learn through your failures, or through others, and it never gets old how challenging it is, cause every time I think I’ve got this beer thing figured out, I’m humbled by failure.”

Price, and his business partner Brian Rauso, are super likable guys that have had plenty of successes along the way, including bringing home multiple awards from the Great American Beer Festival and the World Beer Cup.  In order to meet demand for their brews, they opened up a second location in Costa Mesa in early 2020. With two locations in the OC, the founders drew inspiration for naming their brewery from a local bird.  “We have these beautiful green, loud birds here in Orange County called Green Cheek Parakeets. They are very social, like us, so that’s our inspiration.” 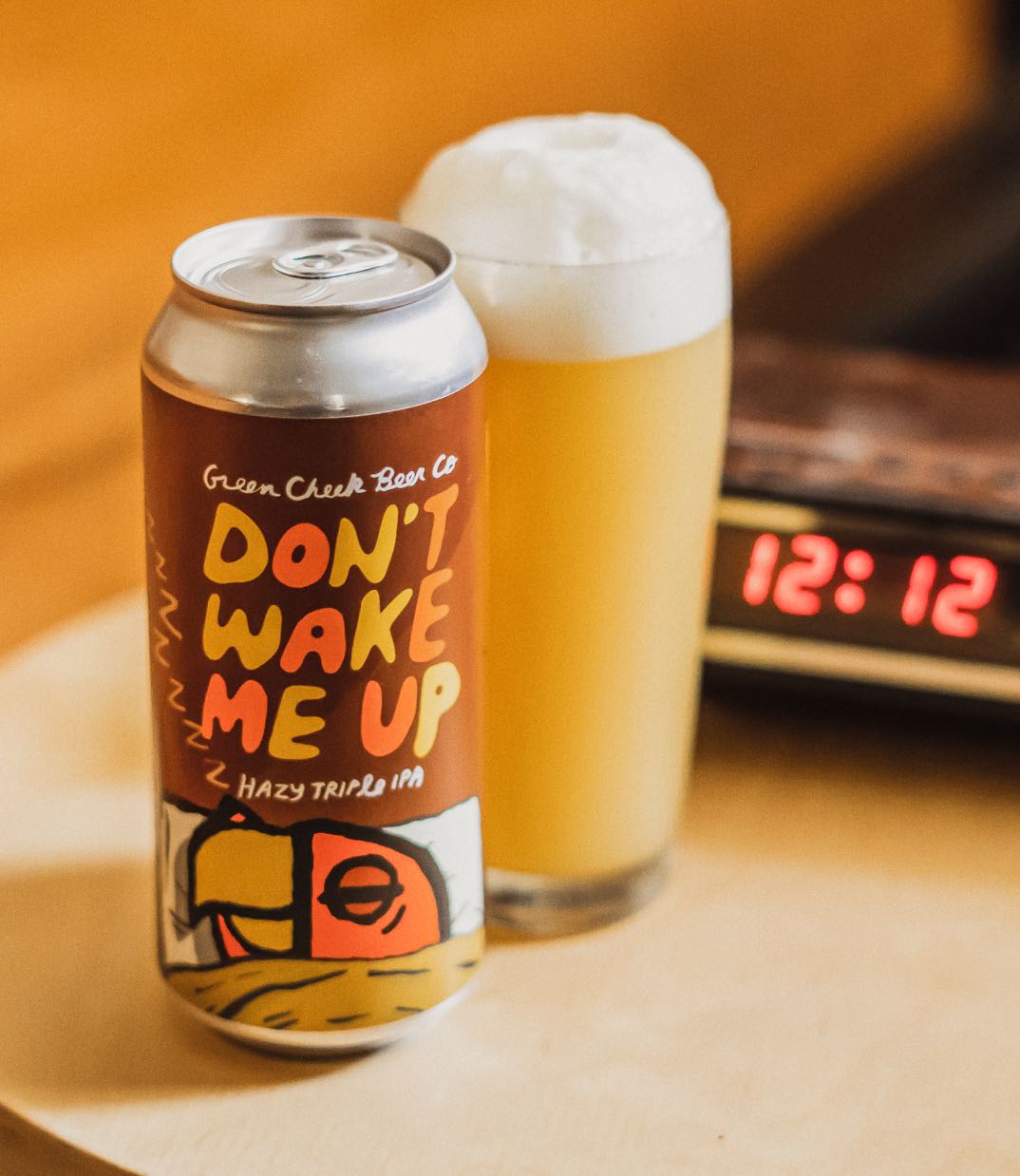 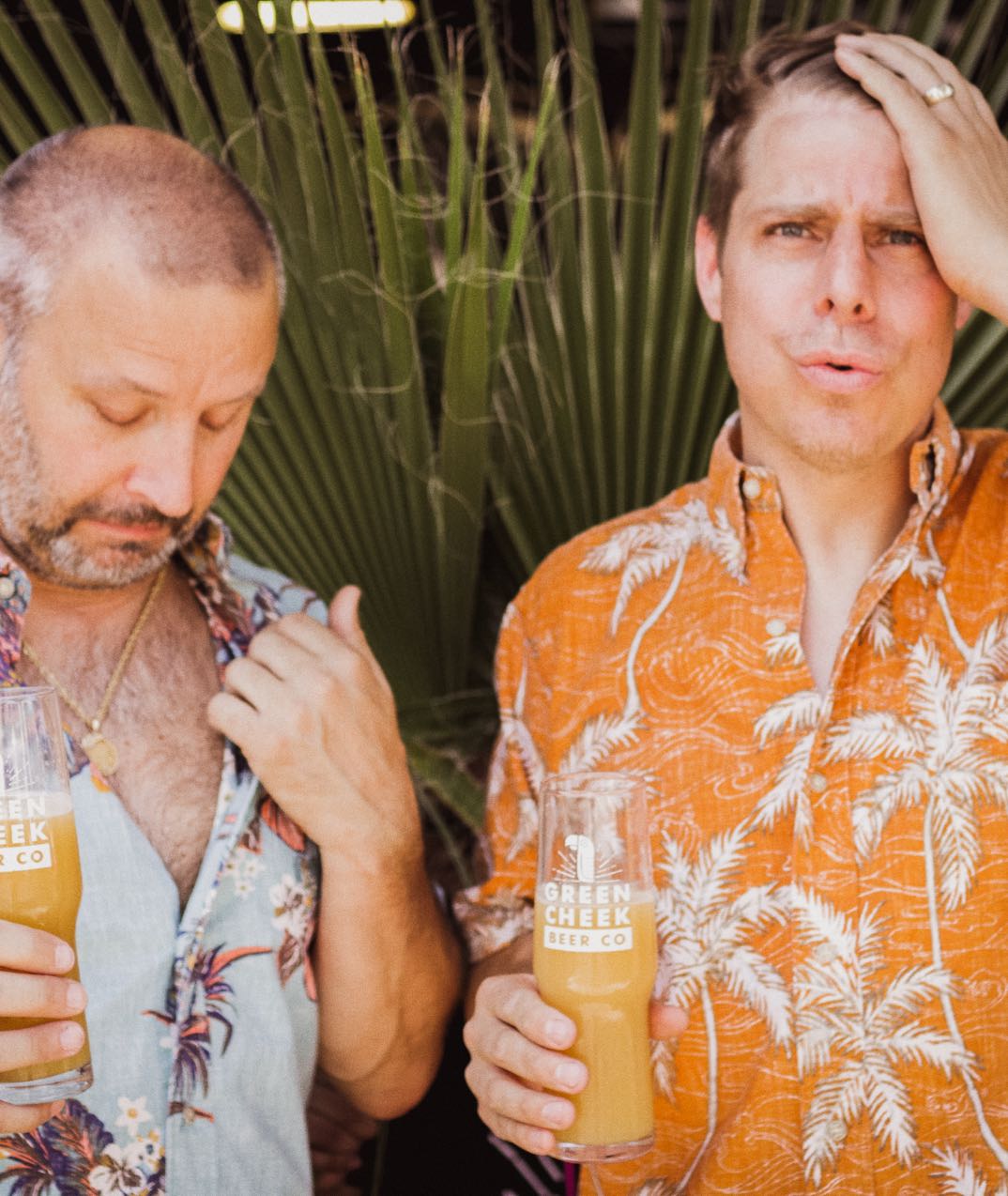 “I love constantly tinkering with each recipe through changes in process and ingredients in order try to get closer and closer to the forever moving target of what I think a specific beer style should be.”

In addition to exuberantly fun vibes, you’ll also find extremely fresh beer at Green Cheek. “We keep a very tight serving window on our beer once canned/kegged, so that our customers always have fresh beer to drink.”

Their current lineup includes a handful of Strata beers, including Don’t Wake Me Up.  Yep, that’s what we’d be saying if we had the chance to sip on one—or two!  This DDH Hazy Triple comes in at 10.2%, and is their highest rated beer on Untapped.  “Strata is a powerhouse! For me, it has the perfect mix of new school fruit, with it’s strawberry jam vibes, and then hits with its fresh cannabis layers underneath that really fills it out, and even has some orange oil brightness to it too. Strata has a character that is unmistakably hoppy, in a way that is fresh, vibrant, and explosive! It works well for hazy IPAs and clear IPAs alike,” states Price.

When he’s relaxing, Price enjoys “pale, dry and bitter beer. For hoppy beer, WCIPA is my jam if I’m having one or two, but if it’s more, something lower in ABV like Pale Ale.”

As he reflects on what lies at the heart and soul of the craft beer movement, Price states, “Pushing the limits! The extreme nature of the craft beer movement has always excited me from the beginning of getting into this. The first time I saw someone make a 9% Pilsner, or put a beer into a Slushy machine, or putting THAT many pounds per bbl of hops into a beer, it’s so much fun seeing what brewers are gonna come up with next.”

Price is just a bundle of positive energy. Maybe it’s his proximity to Disneyland?? Or being surrounded by so many Green Cheek parrots?  Not sure, but whatever it is, we’re huge fans—of Price and his brews!