Trailblazers in sustainability bring a holistic approach to hop growing

When Benedictine monks at Mt. Angel Abbey gaze southward, they see cottonwood trees bordering Abiqua Creek and the hop fields of Goschie Farms. Three hundred sixty acres of hops sweeten the 360 degree view that surrounds the farmhouse and processing facilities. An idyllic setting—we can see why the monks were drawn to settling here and why they were inspired to build a brewery!

The Goschie’s have been farming the beautiful Willamette Valley for over a century. Hop growing efforts are led by Gayle Goschie, a fourth generation farmer and third generation hop grower, with brothers Glenn and Gordie providing solid support. Goschie grew up on the farm and worked at a Portland ad agency for a handful of years after earning a political science degree from the University of Oregon. “But I missed the outdoors… missed the farm, and so ended up coming back to the farm in the early eighties. Friends laugh that that’s a really good degree to come back to a family business with, cause politics are involved,” jokes Goschie.

Indie Hops co-founders, Jim and Roger, met Goschie at Oregon State University while researching hop breeding possibilities. She was on campus for other reasons, but was asked to join one of their meetings—and boom, IH’s first hop grower partnership began with Goschie Farms, a forward looking Oregon hop grower.

Goschie Farms has in many ways been a leader in sustainable agriculture. They were the first hop farm in the nation to embrace the Salmon-Safe watershed preservation program and receive certification; and their leadership in this area has inspired us to encourage other farms to follow suit.

A deep respect for the land they farm resides at Goschie Farms—their website states: “Sustainability is paramount to our operations. Because we depend on the Earth for our livelihood we work hard to ensure that our farming is planet-friendly. In keeping with that commitment, we:

After working with Goschie for more than a dozen years, we’ve noticed that she brings a uniquely holistic approach to hop farming. She recognizes that every aspect of how a hop plant is grown and handled ends up having an impact on the finished product. For Goschie, growing hops is a craft. “When I think about the spirit of craft beer, I think about the definition of craft and how many ways that that beer can be added to, crafted at so many levels. I see myself as a hop farmer, helping to craft that beer. I’m crafting it in the fields. I’m crafting it as I’m preparing for harvest, and harvesting it at just the right time. I’m crafting it as it’s going through the harvesting machinery and into the drying, and drying it to hopeful perfection. So I’m a part of crafting craft beer.” 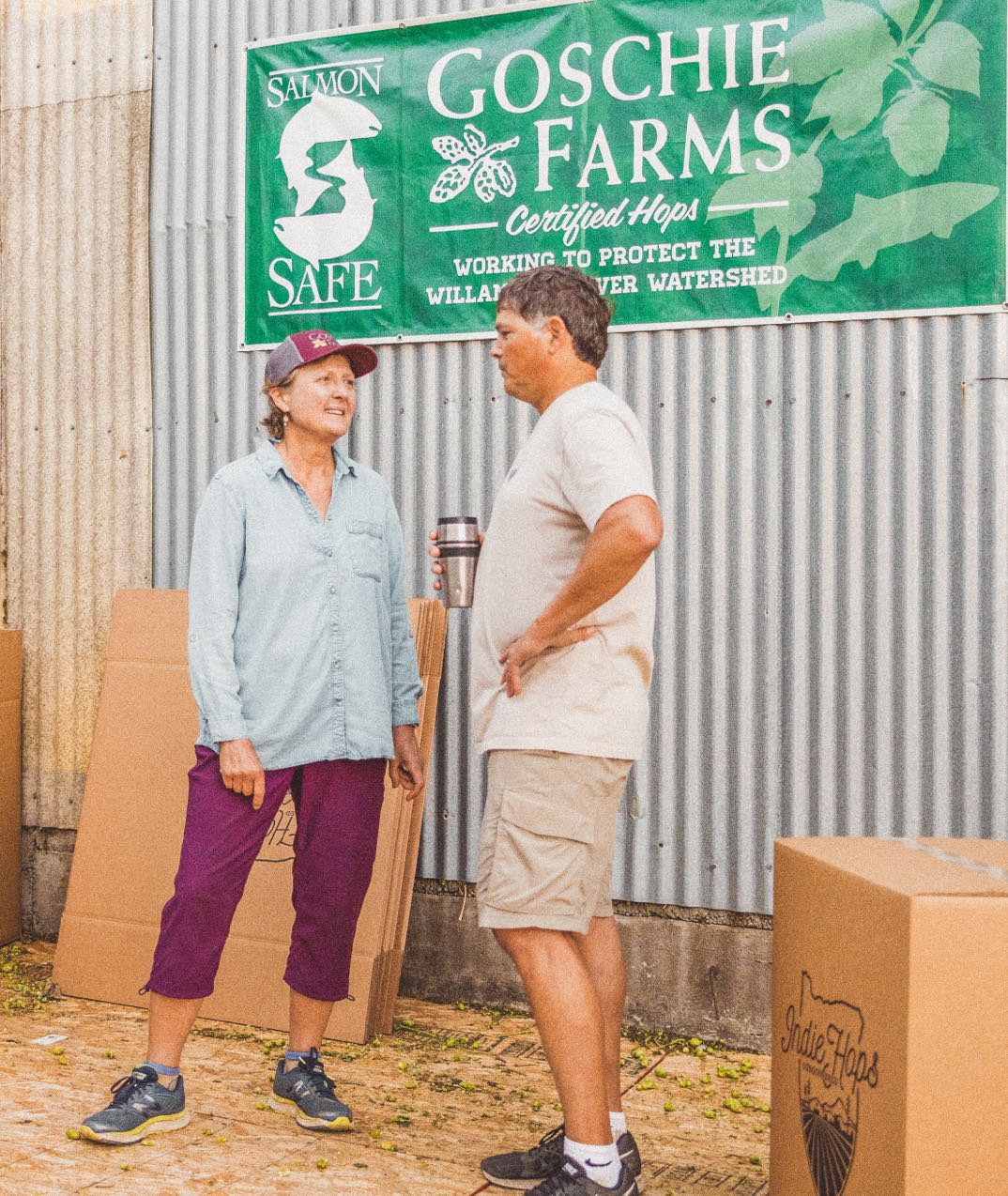 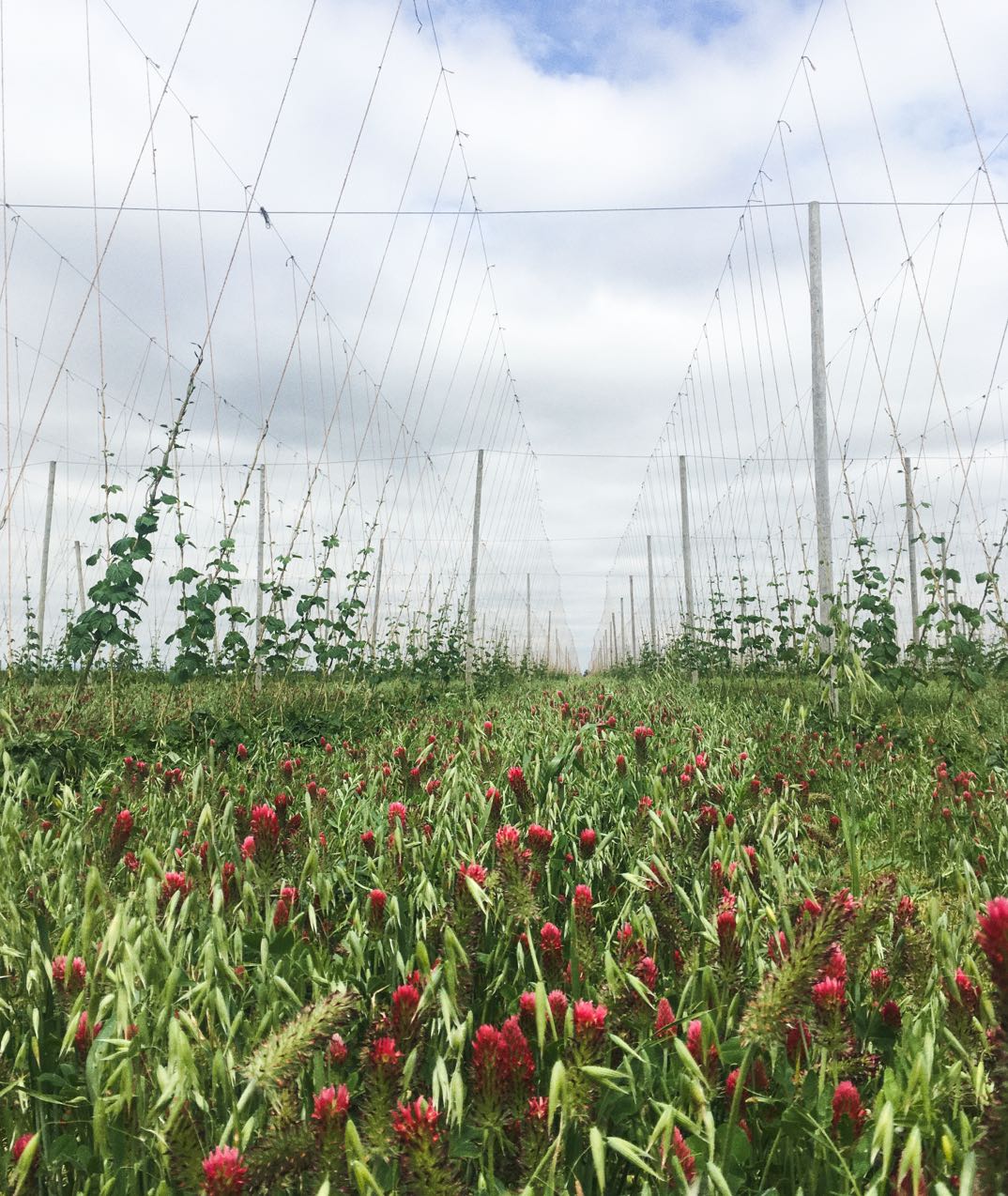 “Indie Hops has been great to be able to really understand the brewer's needs and to be able to push those to us in the farm fields.”

One of our two primary growers, it’s been rewarding to work closely with Goschie to bring quality hops to craft brewers. Part of the reason we connected so well with Goschie has to do with her openness to developing new markets, new relationships and new ways of doing things. From the get-go, she was eager to tackle the craft beer market, and it has been fun navigating the journey together.

“It’s been really wonderful to be able to have the relationship with Indie Hops and their understanding that hops are a perennial crops. So there’s a tremendous investment in putting up the poles and the wires and the cables—the trellising system—that the hops will grow on. And then from that, it’s being able to realize that once that investment has been made, and once the plant comes into full production, we need to have a number of years of full production to be able to recoup our expenses. To have Indie as a partner really in growing our hops has been tremendous. And Indie Hops has been great to be able to really understand the brewer’s needs and to be able to push those to us in the farm fields. In the hop fields, Jim is there providing his opinion on hops and how they’re developing in the field. And so that connection to have between myself and Jim, and then the brewer, it’s a really strong triangle to have.”

We’ve come to expect consistently tantalizing hop aromas year after year from Goschie Farms, and continue to be thrilled to be working with such an incredible grower.